Cross-border bank credit expanded except in the euro area

The modest pickup in international banking activity that began in mid-2017 continued in Q1 2018. Banks’ cross-border claims rose by $451 billion between end-2017 and end-March 2018 to $30 trillion. This left their annual growth rate unchanged at 2% (Graph 1). Cross-border credit denominated in Japanese yen was relatively more buoyant, up by 8%, followed by US dollar credit, which was up by close to 4%. In contrast, euro-denominated credit was down by almost 4% in the year to end-March 2018, similar to its pace of contraction in 2017.

The pickup in international banking activity affected almost all regions. Cross-border claims on EMEs – labelled developing countries in Graph 1 – rose by $89 billion and those on offshore centres by $144 billion, mainly lent to Singapore ($51 billion) and Hong Kong SAR ($42 billion). Among advanced economies, claims on the United States rose by $100 billion and those on the United Kingdom by $40 billion. A notable exception to the overall increase was the euro area, where France (-$35 billion), Spain (-$9 billion) and Germany (-$7 billion) all saw declines. 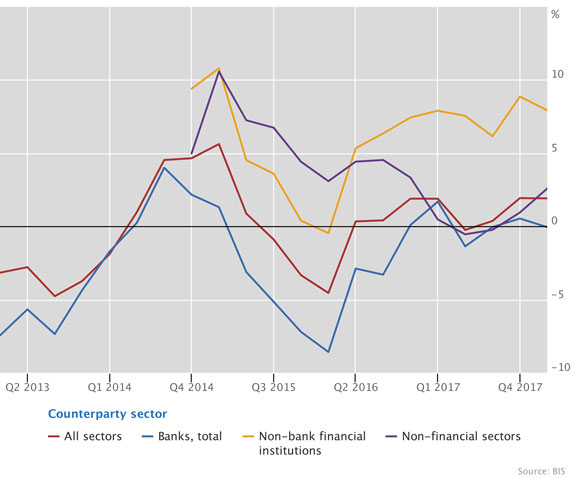 Continuing a pattern that goes back to 2016, the fastest growth was in cross-border credit to non-bank financial institutions, such as investment funds, hedge funds, special purpose vehicles and other borrowers often associated with the shadow banking sector. Such cross-border credit rose by $214 billion between end-2017 and end-March 2018, to $5.8 trillion. Its annual growth rate remained roughly unchanged at 8% (Graph 2).

The latest quarterly increase in cross-border claims on the non-bank financial sector was concentrated on borrowers in only a few economies, namely the United States ($60 billion), Japan ($41 billion), Ireland ($27 billion) and Luxembourg ($25 billion). While a substantial portion of the increase was denominated in US dollars, lending in euro, pound sterling and yen was also up.

The overall pickup in international banking activity was also boosted by a modest increase in cross-border credit to the non-financial sector, mainly governments. After stagnating throughout much of 2017, credit to this sector rose by approximately 3% in the year to end-March 2018 (Graph 2). Cross-border interbank credit including intragroup activity, on the other hand, was relatively flat.

Lending increased across all EME regions 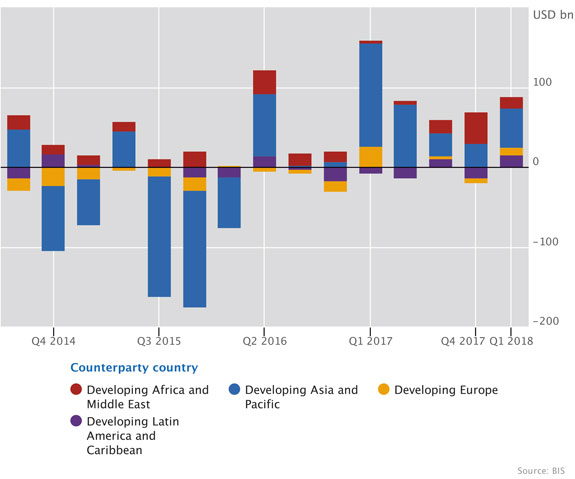 Cross-border lending to EMEs continued to expand, rising by $89 billion between end-2017 and end-March 2018, or 7% over the previous year. The increase was widespread: emerging Asia experienced a quarterly increase of $49 billion, Latin America $15 billion, Africa and the Middle East $14 billion, and emerging Europe $10 billion (Graph 3).

Borrowers located in China accounted for almost half of the total increase in bank lending to emerging Asia in Q1 2018. Chinese Taipei, Malaysia and Korea also received increased lending ($12 billion, $11 billion and $8 billion, respectively). The rise of credit to Latin America was almost fully accounted for by Brazil ($11 billion). In Europe, claims rose by about $3 billion on each of Poland and Russia.

Short-term share was stable despite growing claims on EMEs 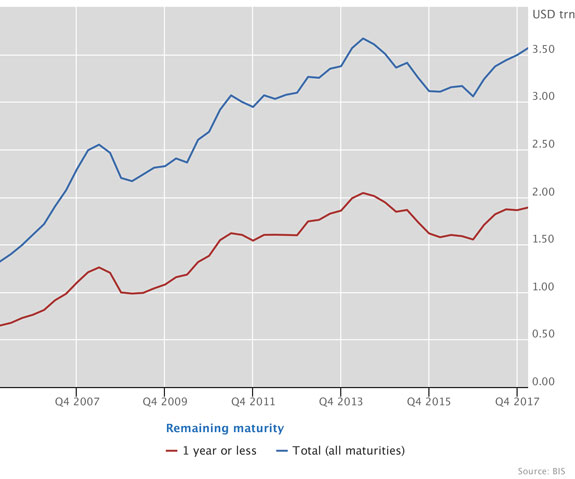 The consolidated banking statistics show that the rise in claims on EMEs over the past few quarters did not go hand in hand with an increase in the share of short-term claims (Graph 4). Historically, this share tended to rise when credit was growing (as new lending was tilted towards shorter maturities) and to decline when credit was contracting. However, between early 2017 and early 2018, the share of international bank claims on EMEs with a remaining maturity of up to one year remained stable at around 53% despite the rise in claims.

Notwithstanding the stable overall share, in recent quarters the short-term share has risen significantly in several EMEs. For example, in Colombia and Thailand the share rose from about 40% at end-2016 to close to 50% at end-March 2018, and in the Czech Republic from 33% to 43%. Short-term claims were particularly high in China and Chinese Taipei, at 71% and 79%, respectively, at end-March 2018. These high shares are largely due to the fact that the majority of cross-border bank credit to these countries is in the form of interbank lending, which tends to be short-term, or bank-intermediated trade finance.