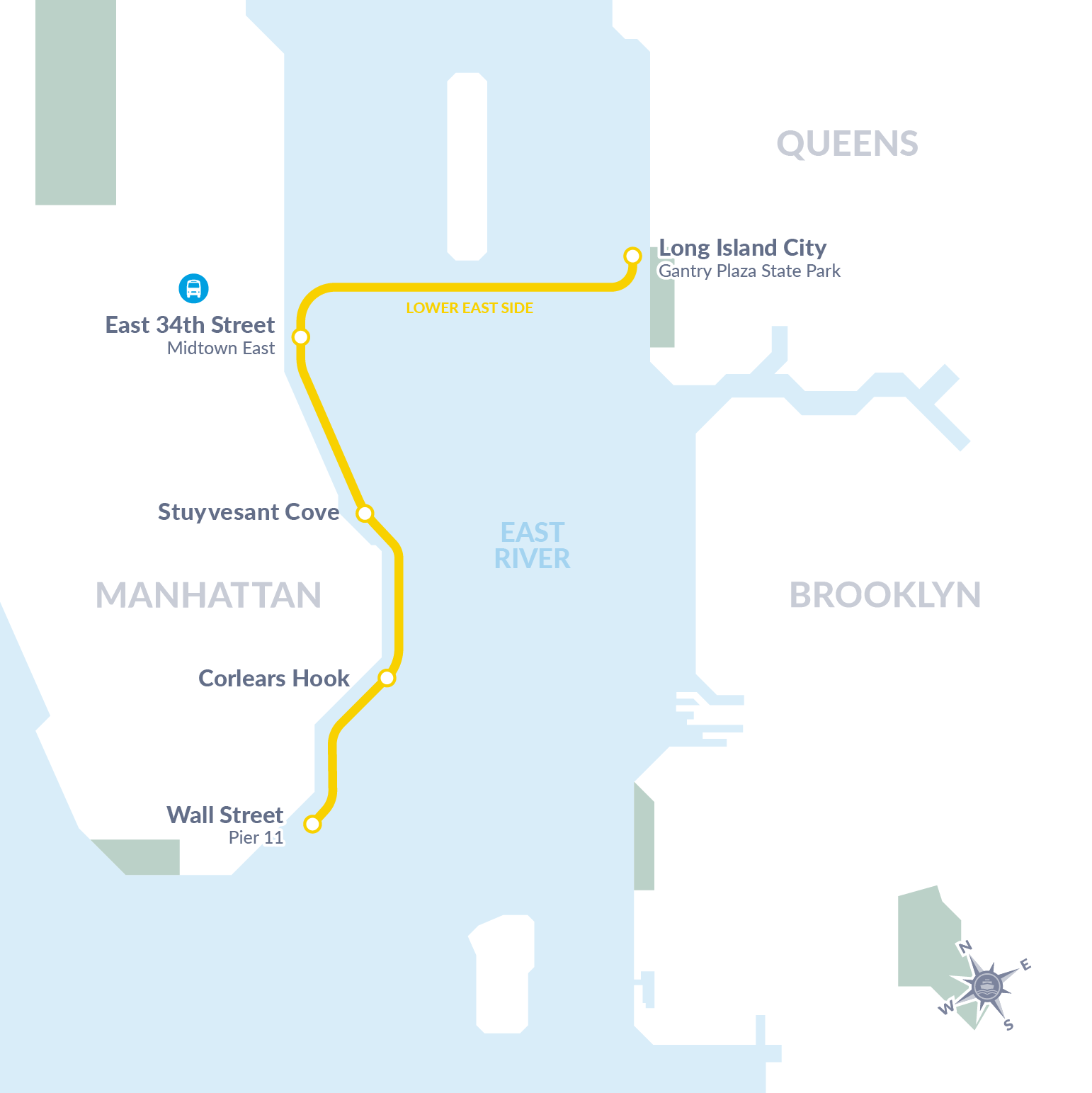 NEW YORK—Mayor de Blasio today officially launched the Lower East Side Route, the sixth and final 2018 route to launch as part of the NYC Ferry commuter system. The new route starts in Long Island City, Queens, proceeds to East 34th Street and two new stops at Stuyvesant Cove and Corlears Hook on the Lower East Side, before ending at Pier 11/Wall Street. The Lower East Side Route, which takes 32 minutes from start to finish, will connect residents, workers, students and more in both Queens and hard-to-reach areas of Manhattan’s Lower East Side, shortening commute times for New Yorkers. NYC Ferry riders are also able to transfer for free to all other existing ferry routes at the East 34th Street and Pier 11/Wall Street ferry terminals.

“It’s official – the initial six routes of NYC Ferry system are now up and running,” said Mayor de Blasio. “NYC Ferries have turned the East River, which once divided New Yorkers, into a point of connection – and are helping us build a fairer city for all. With the launch of the Lower East Side route and the connecting NYC Ferry lines, residents of this historic neighborhood now have greater access to the rest of our city.”

“Today’s historic launch delivers on our promise to make New York a fairer, more connected city for everyone,” said NYCEDC President and CEO James Patchett. “The Lower East Side route is the last NYC Ferry line to launch in 2018, and the start of shorter commutes and more opportunities for New Yorkers across the city. We are proud to have delivered a transit system to dozens of communities that have long been underserved, and look forward to exploring ways to expand the network.”

Since its launch in May 2017, NYC Ferry has served over 6 million riders across the Astoria, East River, South Brooklyn, Rockaway, and Soundview routes, and recently surpassed 3 million riders in the 2018 calendar year. The recently launched Soundview route is already proving very popular, having served nearly 4,000 riders on opening day, and is projected to serve more than 400,000 additional riders annually. The Lower East Side route, which runs approximately every 25 minutes during peak hours, is expected to serve one million riders annually. Detailed timetables for the Lower East Side route, along with a map of all NYC Ferry routes, can be viewed here.

“We’re a city of waterfronts but for too long, those waterfronts were unconnected and disused,” said Manhattan Borough President Gale A. Brewer. “With each new route, NYC Ferry is changing that, linking neighborhoods that had few or no direct transit connections before, and giving thousands of New Yorkers a brand-new, affordable transit option with an unbeatable view. I hope NYC Ferry can eventually expand to serve every community that wants it.”

“Since its launch, NYC Ferry has ushered in a new wave of affordable transportation options, bringing much-needed service to diverse communities throughout the City.  I am thrilled that today marks the highly anticipated opening of the new Lower East Side ferry route. For many LES residents, this expanded service will be the start of a faster and easier commute. For those who visit, it will provide ample opportunity to explore all that this vibrant neighborhood has to offer. I applaud the de Blasio Administration for harnessing the power of our waterways to expand ferry service to the LES and communities throughout our City,” said Representative Nydia M. Velazquez.

“The new LES route will give New Yorkers who live and work on the East side a fast, affordable, and convenient way to get around the city. Thanks to the work of NYCEDC and NYC Ferry, more New Yorkers will have the opportunity to pilot an innovative solution to our city’s transit crisis. I applaud them for their efforts,” said State Senator Brad Hoylman.

“Our city’s waterways are a unique resource that provide opportunities to expand the transportation options available to New Yorkers,” said Council Member Vallone, Chair of the Committee on Economic Development. “I applaud this investment into our city’s rapidly growing ferry service and will continue to advocate for further expansions.”

“I welcome this new ferry service as an additional transit option for a neighborhood in desperate need of a more robust transportation network,” said Council Member Margaret S. Chin. “I thank EDC for its efforts to expand our city’s ferry system, and I look forward to continue working with our city and state partners to ensure that the Lower East Side has not only the ferry service, but the enhanced bus and subway system that this growing area deserves.”

“I’m so excited that NYC Ferry is bringing new transit options to an area of the Lower East Side that for decades has been isolated from the rest of the city’s transportation network. This new ferry route will allow residents in my District to easily get to Midtown, Wall Street, Brooklyn, Queens, and the Bronx, and I can’t wait to see service expand further,” said Council Member Carlina Rivera. “New transit options don’t just help residents get around quickly, they help our small businesses thrive and improve quality of life, and I want to thank NYC Ferry for their work to help the Lower East Side move.”

“As the City approaches the L train shutdown, transportation alternatives for those in impacted areas are extremely valuable. I am thrilled that the new ferry stop at Stuyvesant Cove creates more travel options for my constituents, especially those in Stuyvesant Town and Peter Cooper Village, who will benefit from reliable service. I thank the Mayor for continuing to invest in the NYC Ferry program,” said Council Member Keith Powers.

“Community Board 3 is delighted that residents of the Lower East Side will be able to access ferry service in our community. The ferry will provide public transportation options for residents in an underserved area without adding to traffic congestion. For years, many residents have been asking for the Lower East Side to be included on the ferry service route: they will be very pleased this is now a reality,” Alysha Lewis-Coleman, Chair of Manhattan Community Board 3.

“Two Bridges, the sponsor of the Two Bridges Urban Renewal Site, considers this innovation at Corlears Hook, not only a recognition of the Lower East Side community, but one of the most important culminating events to complete the urban renewal district,” said Victor Papa, President of Two Bridges Neighborhood Council, Inc.

“NYC Ferry is elated to offer its latest connections to the Lower East Side, which marks the full rollout of the six routes of the NYC Ferry system and New Yorkers that have helped make the service such a success,” said Cameron Clark, SVP of NYC Ferry operated by Hornblower. “With new stops at Stuyvesant Cove and Corlears Hook, we hope New Yorkers will continue to take advantage of these new affordable and reliable connections that NYC Ferry provides across New York Harbor.”

NYC Ferry has already employed over 325 people to fill positions such as captains, deckhands, customer service agents, ticketing, operations and more. New Yorkers of all backgrounds and skill levels are welcome to apply. Jobseekers can apply directly at ferry.nyc.

Sneha Namanandi to feature in a Telugu movie called prathyardhi

A Story Of A Small Town Girl To Bollywood- Puja Jha

Excited for Jallikattu’s Oscar entry? here are 5 fantastic award-winning films that the cinephile in you can’t afford to miss

Kerala Blasters FC vs. FC Goa: 10 things to know about the game

LaLiga Santander Matchday 18 preview: Atlético, Real Madrid, and Barcelona all in action on a Super Saturday

Make your Sunday more exciting with the Cult Terra Brunch

Life lessons from the world of mind sports

The Latest in the Mobile Gaming Industry in India