Business savvy Unadkat is also known to dress sharp according to the fashion trends in the arts circle.

“When you’re meeting someone the first thing they learn about you is what you look like. People tend to make assumptions about you because of what you wear and you want them to get the right idea. Fashion is a fantastic way to express your personality and let people know who you are. You can also change your fashion for different situations and even though you’re exactly the same person, because you look different you are perceived differently,” explains Tushar with his expertise in Brand Management.

In past decade, Unadkat executed art direction in the film, fashion, advertising and events industry at USA, England, Scotland, Germany, India and Canada. Winning nominations at the 1999 BBC Asia Awards, his fine art photojournalistic photographic research on Indian Diaspora “Home away from homeland” (AKA: “An Indian Abroad) has been invited to illustrious international art galleries and Unadkat has exhibited more than 25 solo shows around the World.

In 2007, this Global Gujarati known as the AD GURU in Canada, has won the Pride of Gujarat award and invited to exhibit his photojournalistic art at the IGNCA (Indira Gandhi National Centre for the Arts) during the Pravasi Bharatiya Divas (English: Non-Resident Indian Day).
In 2002, Unadkat won a citation from the New York City Council Member calling him, “an outstanding citizen, one who is worthy of the esteem community and the city of New York.”

Winning 17 international awards, Unadkat has worked with OSCAR winning producers and editors like Frank Reynolds, Phil Svaboda, Fred Fuchs to name a few, making a significant name in the Western Cross-Over Film-Industry earning credits on more than 30 films in his portfolio, gaining rave reviews in the international film festival circuits.

Unadkat’s largest contribution to the artistic community is Nouveau iDEA: New International Dimension in Entertainment and Arts. He is the Founder and Executive Director of the non-profit group (since 2002) that disseminates information, produces and promotes international arts with 85,000+ readerships, 8,500 network members and FB group has 13,000 members.

In 2006, Tushar Unadkat won the nomination for the New Pioneers Award by Skills for Change for his commendable contribution as an immigrant to the Canadian community.

In 2012, Unadkat conferred as the Valedictorian for the graduation ceremony on completion of the Business Edge program from the esteemed Rotman School of Management, University of Toronto.

The ReelWorld Trailblazer Award recognizes the accomplishments of ethnically diverse Canadian entertainment industry professionals. ReelWorld has recognized some of the brightest talent for their abilities to bring forth innovative and creative stories, ideas and projects in the world of film and television and in 2012, at the 12th Annual ReelWorld Film Festival Unadkat got honored with this special award.

For many years Tushar has been on board as a mentor with ReelWorld Film Festival committee, conducting face-to-face series, inspiring aspiring entertainment industry professionals. His genuine ability to stand for learning and development partnerships affirms his compassion for community.

Besides, Tushar is frequently invited at various academic institutions to teach and conduct workshops in the departments of advertising and marketing.

“Sharing knowledge can seem like a burden to some but on the contrary, it is a reflection of teamwork and leadership,” said Tushar with passion.

With such credibility, Unadkat is often found schmoozing with who’s who of the celebrated personalities and known as the influencer in the community. Unadkat has been on the JURY for SONY’s BOOGIE WOOGIE 2010 (international chapter) alongside with Raghav, Miss Pakistan World 2012, DESI IDOL 2007-2009, LOVEBIRDS 2016 to name a few.

Most recently, Tushar was the finalist for the National Award that recognizes the Top 25 Immigrants in Canada (2014).

In Toronto, Tushar dedicate his time to more altruistic endeavors; he is currently an advisory board member for diverse academic organization CMCS (Centre for Media and Celebrity Studies), member of SAJA (South Asian Journalist Association) and Executive Director of Nouveau iDEA. However, his pursuits are still international, successfully executes direction of cinema and media arts management in Canada and abroad. 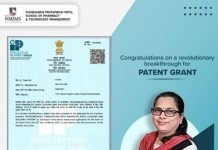