U.S.-India Insight: Do Not Give Up on the BIT

After nine years of sporadic, unproductive talks, the United States and India appear to have given up on negotiating a Bilateral Investment Treaty (BIT). Our governments cannot let this agreement die. Our economic relationship needs a significant achievement to give it purpose, and a high-standard BIT will meet critical needs of both nations: offering security for American investors and putting out a “welcome mat” for much-needed U.S. investments in India’s big dollar infrastructure projects.

BIT negotiations were first announced at the end of the George W. Bush administration. Following the successful negotiation of an agreement to share civilian nuclear technology, a BIT seemed like a relatively simple matter. However, a series of events intervened to slow progress on the BIT, even before the two sides were at the point of shaping a draft. Technical stumbling blocks to progress include:

The United States made only cursory amendments to its model BIT, tweaking the language on labor and environmental rules. These sections essentially call on a treaty partner to maintain their own rules in these areas when courting investors; they do not compel a signatory to adopt certain rules beyond the International Labor Organization Declaration on Fundamental Principles and Rights at Work and its Follow-Up. It must be noted, however, that the U.S. model BIT contains provisions that go beyond the model prepared by the Organization for Economic Cooperation and Development (OECD), which had been the template for India’s previous model. For instance, the U.S. model BIT includes provisions related to foreign equity restrictions, as well as the aforementioned labor and environmental sections. 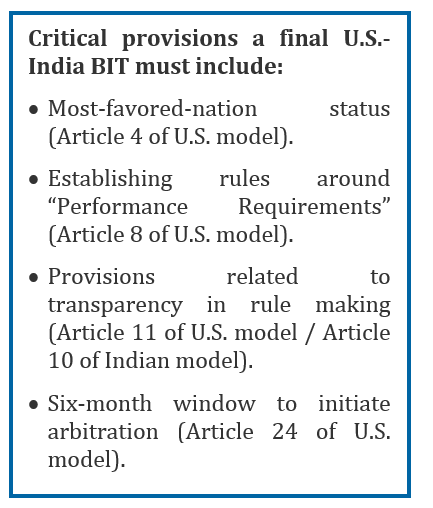 India’s revisions to its model BIT, however, cut more deeply. The two changes raised most frequently include removing the principle of “Most-Favored-Nation” and making it much more difficult, both in terms of time and process, to initiate arbitration.

Clearly there are deep differences between our models. There is certainly middle ground. But to find that middle ground, both sides will have to break from their model in some areas. This will require the kind of senior-level leadership in our economic relationship that we have seen applied to our defense relationship. And it will need a clear articulation of the relative benefits to each side in concluding a quality BIT.

Indian firms have little need for BIT provisions. The U.S. regulatory framework moves slowly and deliberately, and expropriation is not seen as a threat. Instead, the benefit for India in a BIT is giving investors the confidence to invest in India’s energy and infrastructure sectors. These sectors have massive requirements and could generate solid returns.

However, U.S. investors (including capital aggregators like pension fund managers and global life insurers) are well aware of many recent cases where investors have seen reversals due to government action. This is a very real threat in India, and a BIT is one “piece of the puzzle” to bring additional security. It may help un-stick capital that sits on the sidelines today.

Benefits to the United States

Investor protection is a real concern. U.S. firms have faced debilitating contract disputes with government agencies, as well as regulatory changes that have harmed their investments in India. These stories are well-known among investors. Plus India’s increased adoption of local content mandates in manufacturing sectors has become a hot-button issue in bilateral trade talks. For India, this is mainly a reaction to the dramatic trade imbalance with China. Yet U.S. exporters have been caught up in these regulations. Having a robust “Performance Requirements” article in a BIT with India will help alleviate many of these concerns.

The United States has shown a real willingness to break from the model text in the security arena, as seen in the recently concluded Logistics Exchange Memorandum of Agreement (LEMOA). Both sides must show similar willingness in the economic relationship. Otherwise, this will remain a weak leg of our government-to-government relationship, regularly causing damaging slips.

Senior Adviser and Wadhwani Chair in U.S.-India Policy Studies
Richard Rossow is a senior adviser and holds the Wadhwani Chair in U.S.-India Policy Studies at CSIS. In this role he helps frame and shape policies to promote greater business and economic engagement between the two countries. He joined CSIS in 2014, having spent the last 16 years working in a variety of capacities to strengthen the partnership between the United States and India.