PUNE: Sahitya Rangambhoomi Pratishthan awarded two separate fellowships- ‘Vinod Doshi Memorial Fellowship in Performing Arts’ and ‘Tendulkar-Dubey Memorial Fellowship in Performing Arts’ to five-stage artists on Sunday, February 23, at Pandit Farms, Karve Nagar, Pune. The fellowships were given to the artists at the hands of Arundhati Nag, Director, Actor, and Founder of Ranga Shankara, Bengaluru. The fellowship ceremony was held in accordance with the Saarang Theatre Festival, which has been scheduled to be held from Monday, February 24 to Friday, February 28, 2020, at Yashwantrao Chavan Natyagruha, Kothrud from 7:30 PM onwards.

The ‘Vinod Doshi Fellowships’ were given Ravi Chowdhary (Pune), Rasika Agashe (Mumbai) and Dhwani Vij (New Delhi) while the ‘Tendulkar-Dubey Fellowships’, were given to Kaustubh Naik (Goa) and Gurleen Judge (Lucknow). The fellowship, which will provide financial aid to performers were given on the basis of the recipient’s contribution and level of dedication to their area of activity. 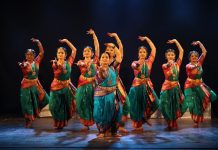 Bond and Beyond’ – A Journey Of Musical Togetherness