PUNE: The title ‘Most Creative Architect of Europe and Asia’ was conferred upon Pune’s renowned architect, Mahesh Nampurkar at the House of Lords, London during the Indo UK Global Business Conclave 2022 for his contribution and creativity to the field of architecture, landscape, and interior.

Nampurkar, who is known for his unique architecture and design in the construction process of various buildings in India as well as abroad, was felicitated with the award at the hands Rtd. Lord Navnit Dholakia, Order of the British Empire (OBE), Deputy Lieutenant (DL) at the program organized by WBR Corp, London in presence of British MP Ruth Cadbury and Nampurkar’s wife Uma, Partner, Suman Shilp held at historic The House of Lords, London.

As this is for the first time this year that an award has been allotted for the category of Architecture and Designing, Nampurkar has become the first recipient of the award. In his exclusive 30 years tenure in the field of architecture and designing, he has rendered various projects such as Sunny’s World in Sus, Pune, Hotel Hilton in Shillim, Amanora Club House in Hadapsar, Viveda Wellness Resort in Nashik, Hotel Le Meridien in Mahabaleshwar and D. Y. Patil Institute of Education College and Hotel Sayaji in Kolhapur.

He has also designed projects outside India in places including Qatar and Dubai, Singapore, and Indonesia. Along with the innovation in building design, environmental friendliness and sustainability are considered as hallmarks of Nampurkar’s work. 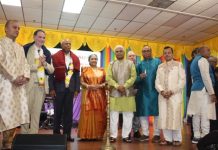